The dangers of the red sea 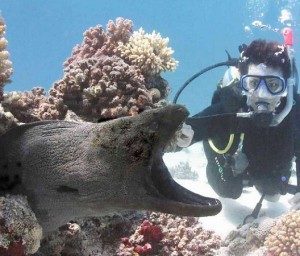 Shark – the largest and most dangerous predator of the red sea, this sea has about 30 shark species, 2nd most dangerous is the tiger shark that attacks people and long-winged shark. Not arguing that and even have the great white shark the most dangerous shark in the world, but evidence of this until no. Maybe someone has specifically allowed such gossip to scare people. No need to fear, these sharks are current in the open sea, and near the shores they don’t float.
Look how many people every day stay in Egypt and they do not attack sharks. However in 2010 there was a case when a shark attacked 4 tourists, but these sharks were caught and killed (so claim the Egyptian authorities). Why did it happen? Explanations were that some ship dumped a batch of spoiled meat in the sea, sharks eat it sailed to shore, feeling the smell of this ship.
In 2011, all is quiet and there was not a single attack, so the shark in the red sea is not so dangerous, many species are not generally a threat to humans.

Stingray
Stingrays are inhabitants of the red sea they are of two types : electric scat and scat hvostokol. The first type has a property to let an electric discharge, it is dangerous because it is painful and possible pareticheski shock. And the second type at the end of the tail has a spike with poison. This injection very painful and the wound is healing long after the injection.

sea urchin
Sea urchins – I think you have heard about them who were ever in Egypt, heard guide just warns that people were not careful and stepped in the water at him. On site or in the market you can buy special Slippers in which to swim in the sea. I swam without them, the first rule is not to walk on the bottom of the sea, as it is at the bottom they are resting. On sandy beaches they are almost there, but on the beaches of reef is their favorite place.
What is the danger of sea urchins, first of all, they’re prickly when on it there it hurts, and secondly, its needles are poisonous. Stepping on it you will feel a paralysis of the limbs of the body, severe pain and burning sensation then you can’t go 3 days (bed rest).
And then another week and go lame, as a really sore foot.
I talked to the woman who stepped on a hedgehog last year, she was bathing on reef beach, to swim or not know how, and walked his feet along the bottom until I stepped on it. HER words : It was a nightmare, all the rest I broke, the mood was no. His leg rubbed some sort of ointment, even after arriving home leg still ached a bit.

Barracuda fish
Barracuda fish – this fish is dangerous because it has very sharp teeth like a saw blade, it is considered one of the fastest fish in the sea can develop greater speed. Grows up to two meters, people shouldn’t be afraid, it feeds on small fish. No need to go under water to them because the Barracuda will not like this and can start to defend and attack you, she has strong jaws and sharp teeth.

Moray
Moray eel – the fish look very scary, not beautiful, like a snake, it has neither scales nor fins. Besides, its bite is dangerous because the infection begins in the human body. The color is different, color camouflage depending where it is located (lives). Has sharp teeth, length 2 – 2.5 m, there are small species less than 10 cm, which no longer grow, although the teeth have very sharp. It is nocturnal, during the day you do them you will not see in the water, they lie somewhere in the gorges and relax.

snake red sea
Sea snake is dangerous inhabitants of the red sea, their venom is several times stronger from Cobra venom. But the action of the poison is very slow, if you are bitten by a snake you have time to get out with water and call an ambulance (or you will be taken to the hospital) where you will be given the antidote.

fish lionfish
Fish Zebra or another name for the lionfish – this species is very poisonous. The impeller looks like a fan of feathers, this fish is even afraid to touch the other fish, she can keep than away. In the times of receiving the injection begins severe pain and burning part of the body, convulsions, decreased heart function, possible death.
The poison of this fish is destroyed at high temperature, in the times of injection should a body part be immersed in hot water and keep for as long as possible, than hot the better. But you also need to realistically assess the situation you will not be able to put your hand in the boiling water 90 degrees from the water you will receive severe burns. It is necessary to select a specific temperature of 50 -60 I think it really put his hand, then immediately go to the hospital.

starfish
Starfish belongs to the class of invertebrates, they come in different sizes from 1 cm to 1 meter. Coloration varies, depending on their type, its rays have spines that are poisonous. When stepping on it it is very painful at the injection site redness and burns.

mallusk cone
Sea mollusk, the Cone is very poisonous, in any case do not take it up, if it ever stings you from its poison immediately begins paralysis of the limbs. You may stop breathing comes analiticheskii shock. Out of every 3 jabs the spike of this mollusc one fatality.

Not worth much to worry, Yes in the red sea many dangerous creatures, but they are not so often attacked, very rarely.
In the forest, too, have different predators : wolf, lynx, bear, but you still go there, and in the afternoon to meet them is almost impossible, and also in the red sea, and in the daytime these inhabitants are resting in the depths or in the canyons, so that you need not be afraid, just be careful to observe the minimum recommendations :

1. do not swim far from shore
2. do not swim in the open sea
3. do not swim at night
4. stay out of the water when you have a cut on parts of the body (by the blood).
If the Red sea would be so dangerous it would not be bathed (even the locals) and no one went to Egypt to rest.
What to do if you accidentally met with some sort of inhabitant of the red sea with the above (this applies to all except the sharks) :
Firstly in any case no need to panic, this is not a shark and it will not be on you to rush.
Second keep a certain distance don’t get near them, why would you want to risk it.